How do I stop my Displayport Monitor from Flickering?

I've had this annoying flickering on my monitor every time I open Thunderbird. The screen would sporadically blink in and out of existence. I've seen the same problem in other programs, but Thunderbird was the most prominent. It was usable, but annoying. I just accidentally found the fix and wanted to document it in case others are experiencing the same issue.

First,let me tell you a bit about my setup:

The DisplayPort out of the video card goes into an AdderviewPro Displayport KVM Switch.

When the blinking occurred, I always thought it was due to the KVM Switch. I've always had mixed luck with KVM Switches--but when you have multiple computers at your desk I think the benefit outweighs the problems. [Other computers connected to the KVM Switch do not exhibit the same blinking problems].

I was reading up on some completely unrelated problems with my Surfacebook's dock and decided to dig into the blinking issue. I was wondering if changing the refresh rate would have an affect. I poured over options in the Radeon Settings panel:

Nothing seemed to make sense. Then I clicked the "additional settings" button: 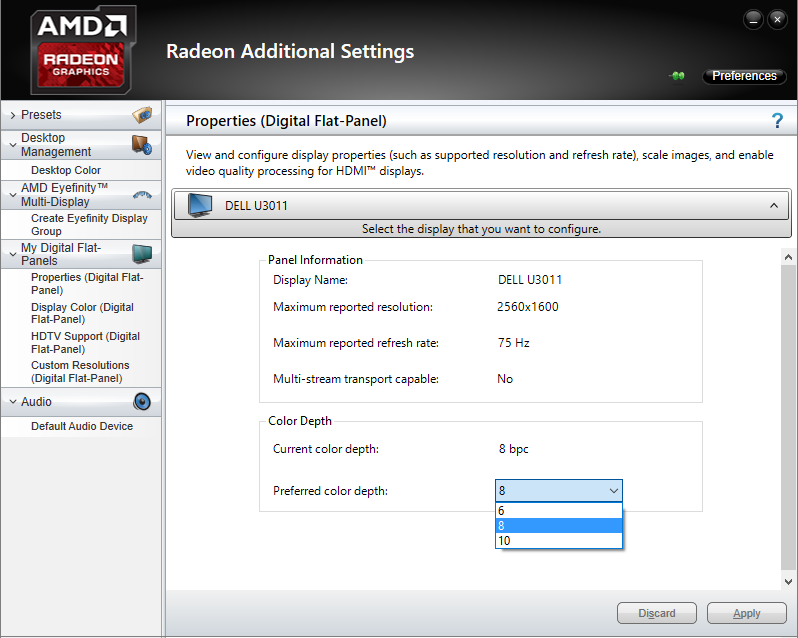 After that, I noticed the preferred color depth setting. It was set to 10. As an experiment I changed it back to 8. Immediately all the blinking problems were gone. I'm not sure what the affects are from setting the color depth from 10 to 8. As best I can tell; the computer appears to be working as expected. I'll keep an eye on it to see if I run into any problems.

I've been using this for a while now without any problems. I have to admit I'm pretty shocked. I'm not sure what is more frustrating; that I lived with this for so long and it had an easy fix or that the problem existed in the first place.

Hopefully this helps someone.

Funny stuff. I'd watch it.

The Bots are Getting Better

The bots are getting better:

The call for shorter podcasts

I once heard that people commute for a max of 40 minutes to get to work. The number of people who commute longer than 40 minutes, is significantly lower than the number who commute 40 minutes or below.

I don't know where I heard this, but I think it was in college somewhere. I wonder if its true, so I thought I'd try to verify some of this information.

Here is a census press release that discusses commute times. The national average is 24.4 minutes ( Or 25.1 minutes if you believe this more recent source )

New Yorkers spend an average of 38.4 minutes commuting one way and have the longest commutes in the country.

This all supports my belief that very few people commute longer than 40 minutes.

Most of the podcasts I listen to need to shorten up their length so that they can be listened to in a single commute. The 1 hour plus podcasts can just get a little disjointed when you listen over the course of 3 different commutes.

I'm planning to move to Polk County, Iowa the shortest commute in the country at 16.9 minutes (Ha, Ha J/K).

Everyone talks about the downward spiral. Why not try to take it the other way?

Is Hef really having a better time at the Playboy Mansion than you are at home?

This was my favorite quote:

"More often than not, money will make you fat and lazy and uninteresting. It's no fun starving to death, either, but for many the risk of losing your essence increases with every buck you pack away."

Sometimes I feel like the more financially secure I am, the less motivated I am. So, from one perspective this happened to me. The fear of starvation is a big motivator, but I haven't been afraid of that for a long time.

I think the "out of site / out of mind" approach works well for me. So, I should probably move some of my 'emergency funds' into accounts that don't show up in my quickbooks total worth. Either that, or add my mortgage to Quickbooks.

How Many People does it take to Post on the Dilbert Blog?

Question: How Many People does it take to Post on the Dilbert Blog?

1 to post
5 to say "First" in a comment
19 to write the "You must be slipping, no one has commented yet." comment
27 to remind the "first" people that all comments are moderated and therefore there is a delay between the initial post and the first comments appearing.
13 to apologize for the duplicate post reminding the 'first' people that the blog was moderated and there would be a delay in comments appearing.
57 to call Scott Adams an offensive idiot and declare a boycott of his blog, books, and writings.
57 to return from a previously declared boycout
20 to actually be offended
35 to question whether Mr Adam's truely meant what he just wrote
1 to read the post

For some reason comments don't seem to be t posting on this blog. So, this is a random test post to see if I can figure out what's going on.

I found a box of pengiun caffinated peppermints today. They are probably a thinkgeek item. I think they were given to me by Luke last time I was in Kansas.

That's a long time ago.

They still pack a punch apparently, since I had a half dozen today and am wide awake despite the late hour.

It almost feels like I'm catching up work and may even get to install Al Emmo 'morrow. Vintage adventure gaming at its best. Or newest, depending on your perspective. The demo had great "old-school style puzzles" but the voice acting was awful.

I read subtitles faster than voice actors can speak, so generally I'll click through the voice acting.

This house is creeking tonight (it always does) and it has kind of put me on a slight edge, jumping at shadows that aren't even there.

I bet there are enough nuts like me to make Himalayan Studios a tidy profit which can fund "game 2." I think I read that 10,000 units would be a roaring success. 1,000 units is around the break even point.

I'm estimating they probably spent around $30,000 to build the game based on those numbers, probably most of it on living expenses for the developers, who I suspect are bored dotcom millionaires who got out at the right time. I want to do that.

The King's Quest 3 remake comnpletely rocked. I haven't played King's Quest 9, yet (but I do have the RC1 candidate installed)