This is the sixth and final part in a series on Redux, a state Management Framework used with single page application frameworks such as React and Angular. This series looks at using Redux without another framework. Please read part 1, Part 2. and Part 3, and part 4, and part 5 before reading this.

Redux provides a short hand to make that happen in the form of a combineReducers() function. Replace the reducer with this:

Redux will automatically know how to combine these reducers. Try the app again, and you'll find that it works.

I hope you enjoyed my series on Redux. Be sure to check out the full book series for an in depth explanation of how Redux and Angular can work together.

This is the fifth part in a series on Redux, a state Management Framework used with single page application frameworks such as React and Angular. This series looks at using Redux without another framework. Please read part 1, Part 2. and Part 3, and part 4 before reading this.

This is the reducer we had in the previous samples:

It is functional, but over time as your application grows will become unwieldy. Each aspect of state is better handled separately with it's own actions and state modifications. To do that, we separate a single reducer into multiple reducers.

This example expands on the previous example, to show you how to split a single reducer into multiple reducers.

State objects and Reducers can get very complex in a real-world application. What do we do to make them simpler? What we're going to do is create a reducer for each section of the site and then combine them into our one big reducer function.

Let's start by creating a reducer for the hello portion of this app:

I created a new function named helloUser(). Notice that this function is named the same name as the state property. This is done on purpose, and you'll find out why in the next article. This function has a similar signature to the reducer. It accepts a state and an action. However, it does not accept the full state object. We'll send in the specific value for the helloUser state, which is just one branch of the main state object. This reducer function only focuses on handling its own state, not other states.

The helloUser() reducer only operates on the helloUser state variable. Notice it defaults the newState to an empty string in the command line signature. We might do something more complex if we were using an object or other data type. This reducer has to handle both major actions. If the name is modified, it sets to the new name. If we said goodbye to the user, then the helloUser resets to an empty string.

This reducer only needs to operate on the goodbyUser state. As with the helloUser reducer, and as such only needs to respond to the NAME_LEFT action. In that case, it takes the value from the action and sets it to the new state. The NAME_MODIFIED state is ignored here.

Run the app and you'll see it working.

This is the fourth part in a series on Redux, a state Management Framework used with single page application frameworks such as React and Angular. This series looks at using Redux without another framework. Please read part 1, Part 2. and Part 3 before reading this.

I want to expand on our previous sample to define an initial state. Technically we already do that inside the reducer, like this:

But, this can be simplified with some code tweaks. First, define the initial state:

We're using syntax shorthand to define the default argument if state is undefined. Try to run things again, and the app should work.

In a real-world app, I'd probably create the state as its own class, and pass a new instance of the state into the method as the default argument. Such details are left out in this proof of principle sample.

This is the third part in a series on Redux, a state Management Framework used with single page application frameworks such as React and Angular. This article series looks at using Redux without another framework. Please read part 1, and Part 2 before reading this.

I write about Redux and Angular in the bonus book to the Angular 6 series.

This article will expand on the previous "hello world" sample to teach you how to say Goodbye.

Add a new state to the Reducer

With every hello comes a goodbye. We are going to create a button that will say goodbye to the user, and then clear out the helloUser value from the store. The purpose of this sample is to add more objects in the store.

First, let's start with the UI:

I added a Goodbye Button, and a span for the goodbyeValue. Back to the JavaScript, handle a click on the goodbyebtn:

This dispatches an action. The type is NAME_LEFT. The value is the current helloUser.

Let's go back to our reducer function and add some code to handle this new action:

It is just another case statement in the switch. We set a new value on the state to goodbyeUser, and set the helloUser value to an empty string. When we set the default, near the beginning of the reducer() method, be sure to initialize the goodbyeUser state property:

Now we need to create a function to render the code:

This just uses getElementByID() to get the span for the goodbyeValue. It sets the innerHTML to the stores goodbyeUser property. Make sure you subscribe: store.subscribe(renderGoodbye)

The code should be runnable now: 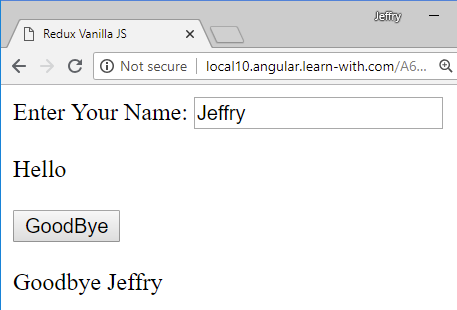 Enter your name and you'll "Hello Jeffry", just as with our original sample. Then click the GoodBye button, and you'll see the name populate after Goodbye and the name after Hello blank out. I did not add code to blank out the user input, but you should be able to do that easily if needed.

Play with a live sample here.

Redux is a state Management Framework that is primarily used with React, but can also be used with Angular. This article series looks at using Redux without another framework. Please read part 1 before reading this.

I write about Redux and Angular in the bonus book to the Angular 6 series.

This article will show you how to write your first Redux application. We're going to create a simple Hello World style sample.

Set up the Infrastructure

Create a new blank HTML Page. It'll look something like this:

Instead of using NodeJS and Build Script tools, I'm just pulling it out from an Internet based CDN because it is the simplest way. Create the reducer:

The reducer is the function that will run when actions are dispatched to the store. It takes in the current state and the action, then runs code to determine what the new state will be. A reducer should not have any side effects. That means it should not modify the existing state. The first step is to make a copy of the existing state:

On first run of the application, no existing state will be defined, so we'll check for that and set some defaults:

The state of the application is just a JavaScript object. I included one property on that object, helloUser and defaulted it to an empty string. Once we start dispatching events, we'll revisit this function to handle those event types. Until then, just return the new state:

That completes the reducer, for the moment.

This calls the createStore() value on the Redux library. The reducer() function is passed in. Notice we are saving the store as a local variable for future reference. Do not put this line of code inside the reduce.

We're going to set this up so that when the user types in the input, the text will automatically update in the span. I've seen similar samples used to demonstrate how binding works in Angular.

Let's switch back to JavaScript and create a function to render the UI:

Whenever the state changes, we want to run this renderHello() function. We do that with the subscribe() function on the Redux store:

Now, when the state changes, the renderHello() function will be called, thus causing the UI to update.

Whenever the username input is modified, we want to dispatch an action to the store so that the reducer() function runs, which will return the modified state, and then run the renderHello() listener to modify the UI. This is the code:

Without a framework, such as Angular, it is a bit complex to listen for events on elements, but we grab the username input with getElementByID() and then listen for the keyup event. We use store.dispatch() to send a NAME_MODIFIED action. By convention, the type of the action is a constant put in all caps, but here we are hard coding it a bit.

We need to modify the reducer() function to handle the NAME_MODIFIED action:

This code is after the undefined check, and before the return statement. It is a switch statement that checks for the action's type, and does actions based on that. At this stage in the application, we only have a single event, but we'll add one more as we iterate over this code.

You should be able to run the code now:

As you type your name the text will appear after the hello.

Play with this sample.

And don't forget to pick up the Angular 6 books from the Learn With series.

Redux is a state Management Framework that is primarily used with React. There is an Angular port of it, ngrx. I wanted to learn a bit about Redux and write about it in the latest Bonus book for my Angular 6 series.

This is the first in a series of articles about Vanilla Redux. In this article we'll talk a bit about terminology used for Redux and how a Redux application should flow.

Many frameworks have their own terminology, so this section will explain some common terminology.

As we progress through this series, we'll cover each item in more detail.

Redux has a unidirectional data flow. That means that data always flows in one direction throughout the app. I put together a diagram: Let's look at each box: 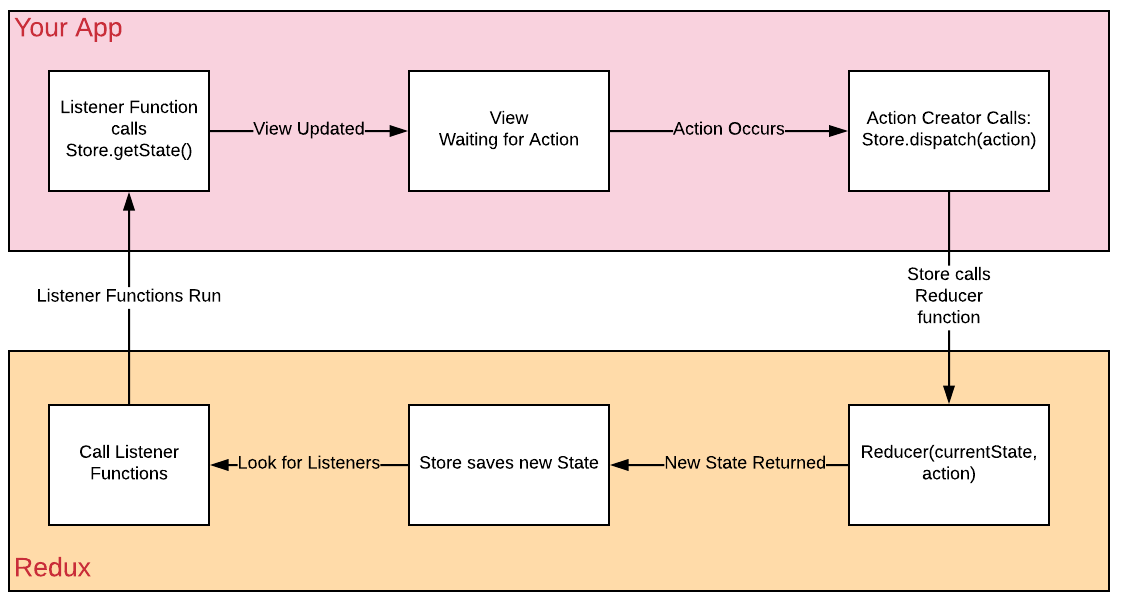 The process is simple to understand. With a shared vocabulary, we're ready to tackle some code and the next article in this series will create the first Vanilla JavaScript Redux sample.